What to read next!
Here's a few to add to your bookshelf.​ 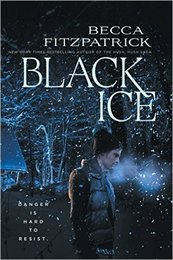 ​​Black Ice was exactly what I was looking for. I'd already read one of Fitzpatrick's others books, and just HAD to read this. The story revolves around Britt Pheiffer and her best friend as they travel up a mountain to vaca in a family cabin. On the way, their vehicle breaks down and they end up finding refuge with two strangers; one of them she met briefly at a gas station and pretended was her boyfriend to save-face in front of her ex. When the story unfolds and pieces of murders begin to come together, she struggles to stay alive.

I love the dynamic that plays out between all the characters and the book didn't take long to finish, mainly because I stayed up way too late reading. However, the first half was a little slow to start, but overall, it was a good read.

The Mortal Instruments by Cassandra Clare

4.5 Stars
​
Somehow I didn't manage to write a review on the first three books, so I'm lumping them altogether. This series was AMAZING! I loved every bit, and read them super quickly. If you haven't had the chance, add these to your list now! I started watching the TV series, and I have to say, it's a little disappointing.
City of Fallen Angels
The fourth book was just as good as the others, and I've started book five. But I just wish that Jace and Clary could finally be together and that they were fighting battles together rather than this back and forth, give and take craziness. Geez. I really hope I don't have to read all of book five for that to finally happen. This is why I've given it 4 stars instead of 5.
City of Heavenly Fire
I thoroughly enjoyed this book, just as all the others in this series. The only thing I didn't like, which seemed to be the same in all of them, was the first 100 pages; they were great but seemed to recap a lot of info from the previous book in the selection. As a reader, I'd just read the prior book and didn't want to be retold info that I already knew. Other than that, once I got pass those pages, I couldn't put it down. I'm a slow reader, and I finished the last 400 pages yesterday. Super good books!

5 Stars
Definitely add this saga to your "What to Read Next" pile!
Hush, Hush
Wow! Nowadays, I normally finish book one of a series and then move on to a different book completely. But I couldn't put this book down! I finished it in less than 48 hours. I bought book 2 earlier today, knowing I'd HAVE to read it as soon as I finished this one. You have to read it!
Crescendo
OMG! I finished this book within 2 days, it was so good! If you liked the first one, you'll love this too.
Silence
​I bought Silence knowing I was almost done with the Crescendo, and I was about to go out of town. I didn't want to be caught without the sequel, and as soon as I finished reading Crescendo, I started Silence. Fitzpatrick doesn't disappoint, and this book was GREAT!

The Burn Series by Annie Oldham

The Burn
The Burn (book one of the Burn Series) is set in a post-apocalyptic time period evolving around the ‘colonists’ and the people that have survived the burn. The colony consists of a society of doctors and scientists that created an underwater civilization due to the nuclear fall-out. Terra, the main character, is a teenage girl who hates living underwater, never EVER seeing what it’s like above ground (The Burn). In fact, it’s practically forbidden to talk about the Burn. The entire plot hooked me. I never expected the horrible sacrifice Terra would have to make in regards for her longing Burn passion and was deeply curious about what would happen once she reached the surface. I really enjoyed the story; however it slowed down a tad for me towards the middle. Even still, it quickly picked back up and the last half of the book was just as easy to read as the first. And the entire book was fun and exciting. I look forward to In Fraction, book two of the Burn Series. I can’t help but wonder what will take place between Terra and her new found friendship.
Infraction
I rather enjoyed Infraction and liked how it began. The relationship/friendship between Jack and Terra takes place while they’re surviving on the run from the government who wants to capture everyone not under their control. Much of the novel was interesting, especially when the inevitable happened and they became captured. I started wondering what was to happen next and questioning a variety of new characters’ loyalty.

The part I least liked was the ending. I was happy with how the situation unfolded until the end and the choices that Terra made independently. Overall, I give the book a four out of five stars!​

Outside by Shalini Boland

The Uglies Series by Scott Westerfeld

Uglies
Wow! This book is SO good! Adventurous, unexpecting twists, and believable characters. The plot is set in a futuristic time-period, where everyone receives a "pretty" surgery on their sixteenth birthday. Before this time, they're called Uglies, and they live in a dorm with other Uglies until they "graduate". Before the main character, Tally, turns Pretty, she finds out about a mysterious town called The Smoke. Once this happens, the adventure begins. If you enjoy YA SciFi, read this book! I bought book 2, Pretties, yesterday!
Pretties
Ahhh! I really miss David and hate how it's between him and Tally now. And don't get me started on Shay. Can't wait to read the next book, find out what's happened with Zane. How is Tally going to fix this now??? Great book!
Specials
**spoiler alert**
It took me much longer to finish this book, but not because it dragged, but because I was busy. I REALLY liked this book, just as much as the others. However, I loved David from book one, and was upset about his absence in book two. But then I fell for Zane in book two, really liked him, and yet he was stripped from book three. They both had appearances and were talked about a lot, but neither had as much stake, and now at the end of book three, David is back and Zane is dead. I hate that. I'll probably read book four at some point, but probably not right now. I did enjoy the series tremendously, and highly recommend reading them. A solid four stars for Specials!

Add these books to your "What to Read Next" list!

The Fault in Our Stars by John Green

The Knife of Never Letting Go by Patrick Ness (Series)

I very much enjoyed this book. It took me a few pages to get pass the spellings of certain words, since it's told from a twelve year old boy's perspective. But then I got used to it and quickly read through this book within three days. Loved the short story prequel (The New World, which is free on Amazon) and I'm looking forward to reading others written by Ness!

The Maze Runner by James Dashner